The Territory of Heard Island and McDonald Islands (abbreviated as HIMI) are an Australian external territory and volcanic group of barren Antarctic islands, about two-thirds of the way from Madagascar to Antarctica. The group’s overall size is 372 square kilometres (144 sq mi) in area and it has 101.9 km (63 mi) of coastline. Discovered in the mid-19th century, they have been territories of Australia since 1947 and contain the only two active volcanoes in Australian territory.  They lie on the Kerguelen Plateau in the Indian Ocean.

Located on Heard Island is Mawson Peak, at 2745 metres, is higher than any mountain on the Australian mainland. From it’s flanks run a number of fast-moving, and retreating, glaciers. 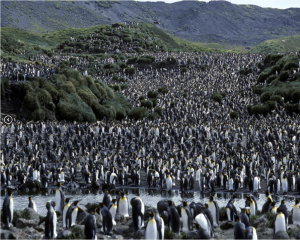 The island is also home to large populations of seals, penguins, and seabirds, extensive areas of mosses and grasses.  While about 300 species of plants and animals have been recorded from the island, estimates indicate that perhaps 300 more species, mostly in the size range 0.1-10 mm, remain to be discovered. These missing species are a major part of the island’s biodiversity; they are crucial to our understanding of the extreme ecosystem.

Heard Island has no recognised human-introduced species; and Heard Island is extremely sensitive to the global climate.  This fortuitous (and possibly unique) combination offers a remarkable opportunity to separate the effects of natural climate change from anthropogenic effects. Completion of the species list will enable more quantitative tests of the effects of global climate on polar regions.

Heard Island is currently uninhabited.  In 1947 the Australian Antarctic Research Expedition (ANRE) established a station at Atlas Cove on the north western side of the island.  This station was dis-established in 1955 as the focus moved to exploring Antarctica